Kinetic typography is an animation technique that mixes motion and text to express an idea.

In other words, it’s moving text.

This is not a new concept; in fact, it was first used in the 60s when feature films started using animated opening titles.

The first among them is considered to be Alfred Hitchcock’s North by Northwest (1959). Soon after, other films started using the same sequence, some with legendary graphic designer Saul Bass at the forefront.

The concept took off because it was creative, impactful, and was able to convey powerful messages in short periods of time. With advancing motion graphics technology and the advent of software like Adobe After Effects, the possibilities with kinetic typography became endless.

In this article, we’ll go over a list of videos and animations that did justice to kinetic typography and its rich history.

Kinetic typography animation or kinetic type can be a wide variety of things today.

There are a lot of specifics that go into creating kinetic type. These include the animation technique, voiceover, artistry, animated typography, plugins, and more.

Software such as Adobe After Effects, Photoshop, and Illustrator have given motion designers and animators free rein over the possibilities of kinetic typography.

Some of the common types of videos that leverage this technique include the following.

Each type of kinetic typography video has unique animated typography, for the most part.

However, you can find templates on sites like Vimeo if you’re not looking to create animated typography by yourself.

In any case, the following are some of the most eye-catching typography projects and videos that have been known for their amazing kinetic typography.

They include everything from animations to commercials, movie tributes, information videos (based on infographics), and more.

Winner of the Patricia Tindale Award, this typographic text animation was made by Dan Palmer of the Canterbury Christ Church University.

It uses a range of animation styles, including animated text and 2D animation, as well as a voiceover to bring the video to life.

The reason this video is a great example is that it incorporates different elements in a single video.

You can see how they use kinetic typography throughout the video in different settings, angles, and more. Meanwhile, you have 2D animated assets in the background complementing the typography. All while a certain message of curiosity is being given.

Fully animated and directed by Eli Guillou, this video is considered to be one of the best works by the artist.

The video itself has an objective to encourage people who feel like they’re lost in the darkness. It looks to help them find the light in the dark so they can move on.

There are two reasons this video is a masterpiece.

Firstly, it uses kinetic typography in the most basic yet minimalistic way. It’s a simple minimalist font, yet it moves around with the rest of the animation extremely fluidly.

Secondly, the animation itself is unique, with intelligent use of shadows, color gradients, and a motion perspective.

Another video by Dan Palmer, he made it for his third-year dissertation as a half-written/half-animation video.

The point of the video was to explain that the natural progression of technology in the world helps provide visual communication for users.

The video has a stop-motion style of animation with unique self-made assets.

The use of kinetic typography in the video can be seen in different forms. For example, the people are arranging the letters in one instance, and the text opens up from a box in another, and so on.

You don’t see a lot of TV show scripts turned into bite-sized animated videos, but here’s one.

Made by Paul Cooper, the kinetic typography video is based on an iconic Breaking Bad scene from the sixth episode of season four. It features a conversation between the protagonist, Walter White, and his wife, Skyler White.

However, the reason this video is great is how each person’s dialogue is shown.

This video was designed by Thibault de Fournas for his graduation project. For the most part, that’s what puts it among the best such examples!

The entire animation is self-reflexive because it shows the evolution of typography from paper to the big screen and so on.

As a result, the first part of the video shows the rules of typefaces and typesetting, and then the second part delves into the introduction of typography in cinema, especially mentioning Saul Bass.

The video uses very simple yet effective animations that look smooth, transitionary, and easy on the eyes.

Another use of a script to leverage kinetic typography – this video is made by Ryan Perera and uses a sequence from the movie Kick-Ass.

The video uses a hand-drawn style that reflects the comic book influences the movie is based on.

The video accurately showcases how emotion and drama can be expressed with kinetic typography. A mixture of moving text animation and simple hand-drawn assets can turn into a great video.

Lyric videos are nothing new, but there is a growing trend of using kinetic typography for lyric videos.

This particular video is made by Paulo Manso, a motion and graphic designer from Brazil. The lyrics are from Jacob Sartorius’ By Your Side.

The video uses a lively hand-drawn perspective, an extremely vivid color palette, and sprouting visuals. It’s a unique style that stands out and gives a whole new perspective to kinetic typography.

Wake County Schools are some of the first to use animated videos and kinetic typography to explain the public school system.

In this video, they explain the four pillars that guide students, including student achievement, stability, operational efficiency, and proximity.

It’s a relatively simple animation style with unique kinetic typography usage. It’s designed to be seen by both the parents and the students.

The video is a great example for beginners who are looking to see how kinetic typography works.

Simple animations are a great example of kinetic typography. This particular one was made by Alena Hovorkova. It shows the transition between black and white text.

As a result, what makes it different is the liquid effect that’s utilized to show the difference between both instances. It’s a simple animation, but it utilizes kinetic typography perfectly.

It combines the Nike logo and other sub-brands into one loading animation. It’s an extremely simple animation but works really well because of the transitions.

Check out the animation here.

This is a simple animated GIF made by Al Boardman. It’s a 5-second GIF that shows the major structures in London in the approximate shapes of the six letters in London.

This is an awesome concept, one that utilizes great design and creativity for something very simple.

Meanwhile, this simple five-second GIF tells an entire story of London, showing you everything from Big Ben, double-decker buses, the London Eye, as well as the common weather of the city, transportation modes, and even the River Thames.

One of the simpler animations in this list, it’s actually not all that simple.

While the only words in the animation are Line Dash, there are still many elements involved.

If you try to watch it frame-by-frame, you’ll see that it uses a lot of elements in the animation.

Therefore, by the end, the words are moving away from each other at a slow speed. However, it’s a great intro animation, and you can take it as inspiration.

Check out the animation here.

This is a great example of expressive typography animation by Maksym Zakharyak. It’s a relatively simple animation that brings together alphabets to spell ‘Relocate’.

However, what you should focus on is how the movement of each letter is shown.

The directional movement is represented by a blue hue that extends according to the speed of the movement.

While any animation with text can be kinetic typography, it’s best to be creative to stand out.

You can improve your designs by following a bunch of motion graphic designers and animators.

Again, the idea is to get your inspiration from them and not mimic them. Also, it will help you create your own creative process, so you can come up with unique kinetic types.

You can follow various motion designers, animators, and artists on sites like Dribble, Behance, Vimeo, and more, to stay connected with the design world.

Meanwhile, you can also get inspiration for marketing designs, logos, and much more.

When you have a design in mind, you can make it on a platform like Pixelied and then work to turn it into kinetic typography.

What is Analog Photography and How it Works? 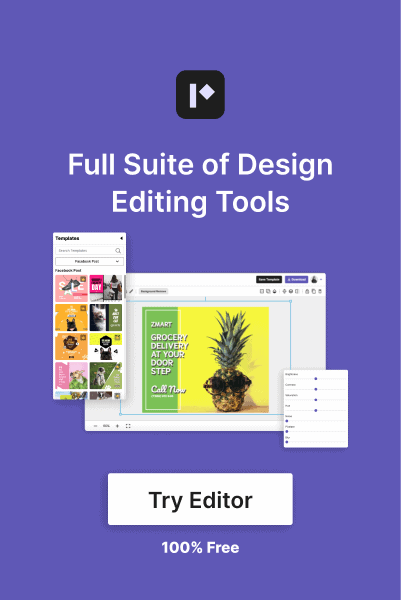