When YouTube launched in 2005, it set off a new era of online content for entertainment. Fast forward 16 years, we now have meme pictures for practically every situation.

Today, everyone loves a good meme, regardless of their age. Sure, you may have to explain memes to some people, but we’ve all been there.

In the world of marketing, memes were initially considered to be unprofessional. But as memes became more mainstream, marketers adopted the concept of memejacking, especially to reach out to younger audiences. That’s because it’s a great way to communicate with that audience, and it’s pretty easy to go viral if you do it right (and that’s just free PR).

In this article, we’ll go over memes, why you should use them, and how you can create hilarious meme pictures.

A Brief History of Meme Pictures

Eventually, people started to clip out certain frames and add a caption or text to them. Since a lot of people had seen those videos, they immediately understood what that frame implied.

That was when the word ‘meme’ really took off. However, that isn’t when memes actually came out.

Back in the late ‘90s, when memes weren’t called memes, we had some early internet meme pictures, such as Godwin’s Law, All Your Base Are Belong to Us, It’s a Trap, and the ROFLcopter.

In the late 2000s and early ‘10s, custom meme templates started popping up. That included several drawn characters like the Y U No guy, Rage comics, Loss, Trollface, and others. Meanwhile, we also had templates like the Philosoraptor, One Does Not Simply, Bad Luck Brian, Condescending Wonka, and more.

Eventually, the evolution of meme pictures led to event-specific memes where one meme is popular for a certain period of time and then dies after a while (Ugandan Knuckles, anyone?). And, at this point in 2021, we’re at a place where out-of-place things are now memes; we call them abstract memes.

How You Can Create Hilarious Meme Pictures Today

Making memes is all about being in the loop with everything that’s happening. That’s because today’s memes usually come out of certain events, such as the Bernie Sanders meme.

However, that doesn’t mean that memes can’t originate from other sources. For example, every once in a while, you’ll find a SpongeBob, Harry Potter, Disney, Star Wars, Kung Fu Panda, or anime meme.

In any case, if you can’t follow up with current events, trends, and news, you can always get some inspiration from current memes.

Best Places to Get Some Meme Inspiration

You’ll find a lot of funny pictures on social media, especially dank memes pages on Facebook and Instagram. However, there are several other places you can get your inspiration from.

Tumblr has grown into a place where completely random people can share their opinions, discuss, and connect with like-minded people. The site has been losing users over recent years, but it still remains extremely relevant.

The site has been single-handedly responsible for launching tons of memes. That’s because each thread presents an opportunity for people to continually engage in something and expand the meme.

If you go to Tumblr’s memes hashtag, you’ll find over 4 million followers and over 2000 posts daily. The best thing about it is that anyone and everyone can participate in the conversation at any time.

Mostly, people who understand how Tumblr works (use the right Tumblr header size, hashtags, and more) are the ones who post the best memes.

Reddit has grown to massive proportions in recent years; it’s several communities based on people’s interests and likes. With its system of upvotes and downvotes, Reddit gives its users the power to make each piece of content unique and viral.

As witnessed by the recent GameStop fiasco, Redditers have the power to enact massive change.

Many people often turn to Reddit to post memes in relevant subreddits when they make a new meme. If you follow the right subs and threads, you’ll find a goldmine of relevant memes.

Imgur is a massive sharing and image hosting site that’s used by millions of people. It integrates with social media sites like Twitter and Reddit, and that makes it an easy-access meme archive.

While Imgur started with typical images, it turned into a completely meme-focused site. That doesn’t mean there isn’t other content there. You’ll find several categories of images, but in the memes categories, you’ll find even more categories. You can find the dankest memes, old memes, year-based memes, and much more.

Furthermore, you can also find tons of GIFs on the site. The best thing about the site is that you can import the images and GIFs and share them directly.

Pinterest is a massive image discovery search engine where you can find inspiration for fashion, homes, recipes, and, most importantly, memes. There are practically billions of Pins on Pinterest with tons of ideas, content, and inspirational material.

You can save each Pin, organize them, or develop your own lists. Similarly, you can go through the lists of others. You can also follow specific accounts dedicated to posting memes daily. Some of the best meme accounts and terms you can follow include:

Now that you have your inspiration, you just need a decent meme generator to create your memes. You have the idea, you know how you can create a reactionary meme, you know what meme template you need, so all you need is a platform where you can develop it.

You can use sites like Canva to develop memes, but it’s best to use more refined meme generators and platforms. Here are the top sites that let you create great memes.

Pixelied is an online image editing platform that offers various tools, ready-made templates, and designs that can even be made by someone with no graphics experience.

You can easily create product images, branded designs, backgrounds, and edit pictures. It essentially brings the amount of time it takes to develop such pictures down to the point that it takes just a few clicks rather than thousands of hours to make your meme picture.

Other than that, you can also find millions of stock photos that are relevant to each brand, industry, and purpose. You can also find thousands of icons, stickers, and mockups to help you design what you need.

As content creators or digital marketers, you don’t need to learn any software. You can just go to Pixelied and memejack any current meme with a touch of your own on the editor.

Pixelied proves to be a versatile tool, but it’s a high-effort meme generator.

Filmora is a complete platform that lets you edit videos, pictures, and develop memes from scratch. It is a pretty simple meme generator that doesn’t require much effort.

All you have to do is drag and drop or upload the file online. You can then make the necessary edits immediately, including adding any other elements, text, or anything else.

After you’ve added your elements and caption text, you can export the image, gif, or video and then download it in various formats.

Imgflip’s meme generator is one of the most basic meme generators you can find online. It has an extremely simple user interface and straightforward editing options.

You can adjust the images, their spacing, and add text in different places (and in different colors). You can also choose from any font you currently have on your device.

Other than that, you can add custom stickers, images, speech bubbles, and more. You can also scribble on the meme if you want. Most importantly, you can create meme chains.

Kapwing is a completely free online video, GIF, and image meme maker. When you go to the site, you’re immediately prompted to get started.

You can just use one of the basic meme templates if you’re in a hurry. Otherwise, you should get started and go into the studio editor. There, you can start with a blank canvas and add files to it.

After that, you can text, images, scenes, audio, subtitles, timelines, and other elements.

Make a Meme is another simple meme generator that you can start using immediately. You can either search for a specific meme or choose among the meme templates shown. They usually have the latest meme templates on their homepage immediately.

When you click on any image, you can add a top text and bottom text and then add a custom title. After that, you can preview the meme or just generate it. You can also change the font, text color, and outline.

The only downside of Make a Meme is the severe limit on making memes. For example, at times, you need more than two text boxes.

A great way to get a good following for your memes is to share them on social media sites. Use an Instagram name generator to make a meme-focused account and share your hard work there. Eventually, you’ll rack up a good following.

If you are a digital marketer, you’ll most likely be making reactionary memes, i.e., will be memejacking. In that case, you can make relevant memes and share them on LinkedIn, your Slack groups, or any other place you communicate with your community.

Becoming a meme nerd is all about being up-to-date with current events, trends, and news, so you can immediately understand any memes that come out. Then, you just have to think about how it relates to something else, make a connection, and think of a hilarious caption.

After that, use one of the meme generators to create your meme pictures, and you’re good. If it catches the attention of people, you’re bound to go viral, giving you a massive PR boost.

How to Create and Use a Stunning Background Design 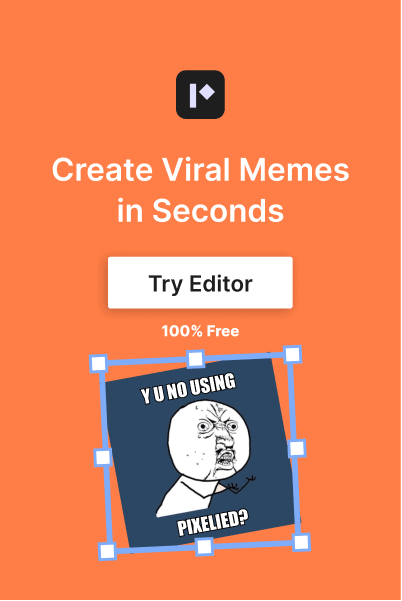